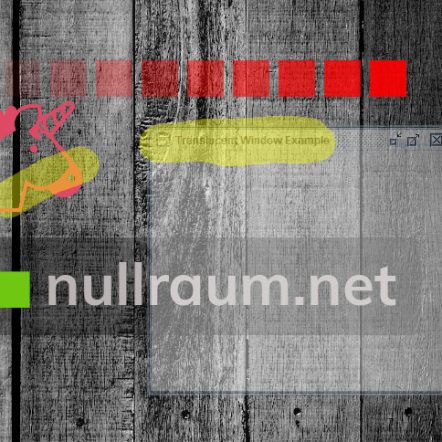 In the field of optics, the distinction between transparency and translucency is of great importance. However, the exact differences only become clear on a macroscopic scale. Fortunately, the world of software development is much simpler than the world of physics.

In the field of optics, the distinction between transparency and translucency is of great importance. However, the exact differences only become clear on a macroscopic scale. Fortunately, the world of software development is much simpler than the world of physics. For this reason we use simplified definitions of these terms throughout this series of articles. Nevertheless, we try to use the terms as accurately as possible.

In programming, the terms transparency and translucency are often used interchangeably. ‘Translucency‘ is sometimes also used to describe a glass effect where an image, or parts of it, are blurred out.

Translucency
A translucent material permits some light to pass through. The material scatters the light which results in diffusion or distortion. To achieve this effect, the pixels of the layers are usually composed together in a back-to-front order using an (alpha) blending equation.

Opacity
A material is opaque if it absorbs all (visible) light. A fully opaque surface permits no light to pass through. However, the material itself emits some light.

With binary transparency one or more colors of the indexed color palette are explicitly defined as transparent (GIF format). A pixel is either visible or not. No intermediate opacities are possible which, among other things, leads to ‘harder’ edges.

With alpha transparency the transparency information is stored in a separate channel which means that the opacity levels can be controlled on a per pixel basis (PNG format). Therefore, this approach supports gradations of opacity which allows ‘softer’ edges and smoother transitions.

Bitmaps with a depth of 32 bits also consist of three channels with 8 bits each (R=red, G=green, B=blue) but have an additional 4th channel (A=alpha) which is normally used for modelling opacity.

Red, green, blue, alpha (RGBA) is basically an extension of the RGB color model with an extra channel containing information about opacity. Usually the alpha channel has the same color depth as the other channels (8 bits).

Representation of a single pixel in memory

The rgba() function in CSS define colors using the above mentioned Red-green-blue-alpha (RGBA) model.
The alpha parameter is a floating point number between 0.0 (fully) transparent and 1.0 (fully) opaque. The background pixels (unicorn) and the corresponding translucent foreground pixels are blended together.

In addition to RGB and RGBA, other color models such as HSL (Hue, Saturation and Lightness) or HSLA (HSL with an alpha channel extension) are available in CSS. Read the article about colors and stand alone opacity on w3schools if you want to learn more about color models in CSS.

Alpha blending has uses in many fields and refers to many different operations. For us, it is the process of combining a background color with a translucent foreground color, thereby producing a new blended color.[1]

Alpha blending operates on single pixels. If we work with RGBA pixels, usually the alpha values of both, the source pixel and the destination pixel, are taken into account when calculating the new color components. However, which algorithm is used for alpha blending and how exactly the results should look like, depend on the specific application.

We assume that we compose all fragments in back-to-front order, that we work with RGBA pixels and that the possible value of alpha ranges from 0.0f to 1.0f, inclusive. Let’s think about some possible cases.

Alpha Blending using the Over Operator

In 2D computer graphics the most commonly used operator for alpha blending and for simulating translucency is probably the over operator. It works on RGBA pixels with and without premultiplied alpha.

The over operator is one of 12 operators which were described by Porter and Duff in their paper Compositing Digital Images (1982). However, the operator was not intended to be used for blending pixels but to overlay and combine images. Alpha blending is only one application of the over operator.

In Java a window with uniform translucency can be created by invoking the window’s setOpacity(float opacity) method. Each pixel of this window will be drawn with the same alpha value. The parameter of this function takes a floating point value in the range of 0.0f (fully transparent) to 1.0f (fully opaque).

Each pixel is drawn with the defined opacity of 45% (55% translucency).

Uniform translucency in Java is easy to implement, fast and uses less memory than per-pixel translucency. The downside is that gradations of opacity or alpha compositing are not possible. Each pixel of the surface has the same translucency.

If you want to use uniform translucency be sure not to invoke window’s setBackground(Color bgColor) method with an alpha < 255 because this installs per-pixel translucency. Read more about that. 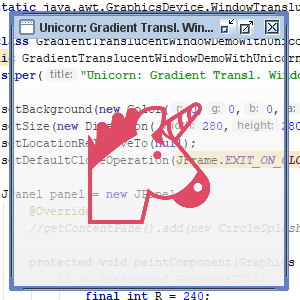 Per-pixel translucency in Java with a gradient

Per-pixel translucency in Java with a gradient

Java per-pixel translucency example
PNG image (with transparency) drawn on a JPanel with a gradient and decreasing translucency.

The tranclucency is decreasing while the gradient moves toward the bottom of the window.

In Java per-pixel translucency requires a few initial steps like defining alpha values over the rectangular window area by invoking window’s setBackground(Color bgColor) method, but in general, it is also easy to implement.

With per-pixel translucency it is possible to create gradients with different alpha levels and to use alpha compositing. It uses more memory and is not as fast as uniform translucency. But that doesn’t usually matter in 2D computer graphics when painting windows for desktop applications.

The final color of the pixel also depends on the alpha value that may have been previously passed to the setOpacity(float opacity) method. If an alpha value below 1.0f was passed to this method, the foreground pixels (component, control, brush,…) and background pixels (window) are alpha blendend using the over operator. The blending behavior can be changed using Java’s AlphaComposite class.

Pascal is a computer scientist/software engineer and digital marketer by profession with over 15 years of experience in the industry. He is skilled in data science, statistical data exploration and data visualization.

At the moment, he is trying to exhaust the limits of augmented reality in marketing using Google's ARCore and Unity's 3D Engine. 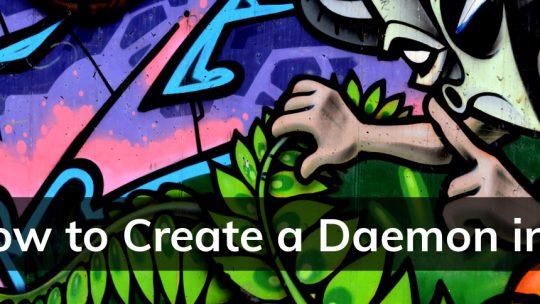 How to Create a Daemon in C

Daemons are programs on Unix-like operating systems that work in the background. They usually handle important recurring tasks without the user's knowledge. 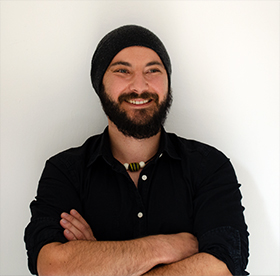 Pascal is a computer scientist/software engineer and digital marketer by profession with over 15 years of experience in the industry. He is skilled in data science, statistical data exploration and data visualization.

At the moment, he is trying to exhaust the limits of augmented reality in marketing using Google's ARCore and Unity's 3D Engine.

Any cookies that may not be particularly necessary for the website to function and is used specifically to collect user personal data via analytics, ads, other embedded contents are termed as non-necessary cookies. It is mandatory to procure user consent prior to running these cookies on your website.